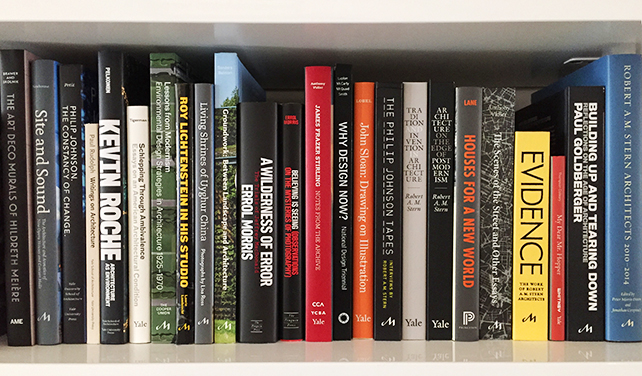 The Office of the University Printer has been fortunate to have many talented designers support its efforts over the years. We’re reconnecting with them to see how their time at Yale has shaped their careers, and what they’ve been up to since leaving the OUP. There may be no better person to kick off this new series than Yve Ludwig, who worked at our office after completing an MFA in graphic design at the Yale School of Art (she also graduated from Yale College, where she began her design studies). She later became an associate partner at Pentagram Design, before launching her own design practice in 2012. Since leaving Yale, Yve has continued to support the University’s branding initiatives; while at Pentagram, she designed the Yale College viewbook, which she maintains to this day. Over the years, she has designed dozens of art, architecture, and design books, which have won numerous awards; you can view more of her work here. We were delighted to learn more about her process, interests, and accomplishments.

(Pictured above: a sampling of the books Yve has designed.)

How did you become interested in graphic design? Did you have any experience with it before studying at Yale College, and did you consider other majors besides art?

In high school, I was the student who volunteered to make the posters and programs for the band, orchestra, and theater shows. I designed and illustrated the foreign language magazine. I became editor-in-chief of the yearbook—mainly, I think, because there was a 200-page book available to be designed! So yes, I had a long-standing interest in graphic design before starting college.

When I came to Yale, I started taking art and design classes right away, but I thought my major should be something more “serious.” I basically accumulated an art major with an emphasis in graphic design while working toward a philosophy major. When senior year came, I realized that I’d rather work on a senior project in art to complete that major than complete the final course work and write a senior thesis in philosophy. (Or both, which was also a consideration!) I can’t imagine where a philosophy degree would have taken me, but my Yale design education has served me very well.

Why did you decide to go back to Yale for an MFA, and how did your graduate education change your approach to design?

When I graduated from Yale College, I spent two years working in the design office at Cooper Hewitt, Smithsonian Design Museum, which was a dream job for me. I designed a wide range of materials including invitations, event posters, a quarterly magazine, as well as exhibition graphics and exterior signage. Each time we tackled a new exhibition, I felt like I was getting a private education in the subject matter as we worked closely with the curators to convey the essence of the show in print, in educational materials, and in the galleries. When I left Cooper Hewitt, it was hard to find another job that I loved as much. I thought that a graduate education would help me to take the next step forward in my career.

The MFA program gave me time to explore many areas of design freely, including interactive design, motion graphics, and print design. I was also challenged to create work that was wholly my own—which I found both very difficult and ultimately rewarding. I came away from my degree feeling much more confident in handling complex content and applying my own point of view to it. I also honed my typography skills significantly, and solidified my love for print, and particularly for book design.

When, and for how long, did you work at the Office of the University Printer? What is the most valuable thing that you learned there, and what is the most memorable project that you worked on?

I worked for the Office of the University Printer for a little over a year, after completing my MFA at Yale in 2005. I learned many professional skills while working with John Gambell. We had clients from all over the University ranging from the Office of the Secretary, to Yale SOM, to the Yale Sustainable Food Project, which was just beginning at the time. One valuable thing that I learned in the OUP was to always try to imbue my work with Yale’s core identity—to make things look “like Yale”—while maintaining a vitality that would expand Yale’s visual presence. I was fortunate to continue working with Yale clients while at Pentagram, and I’m grateful to maintain fruitful relationships with a number of Yale clients in my independent practice.

One of the most memorable projects I worked on in the OUP was preparing for the visit of the President of China, Hu Jintao. We created a series of invitations, programs, mugs, and signage all in English and Chinese, which was a first for me. We also designed a retractable Yale-patterned backdrop for photo shoots. I’m amused to this day when I see official photos from Yale that include my pattern. 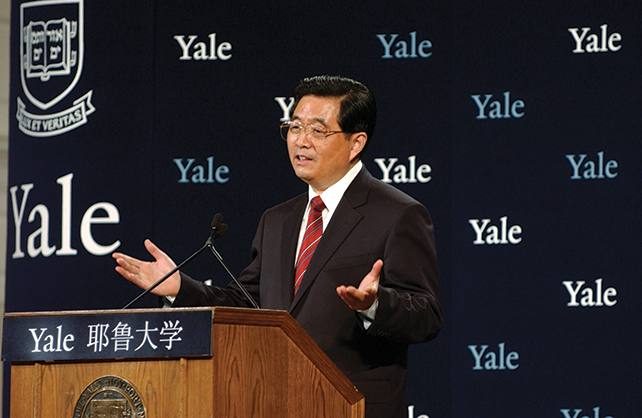 President Hu Jintao speaking in front of the backdrop that Yve designed.

You’ve worked extensively with publishers, cultural institutions, and nonprofits. Do you find that kind of work to be the most rewarding?

I’ve had great luck in being able to work with institutions, organizations, and publishers that I truly care about, and with clients who are smart, dynamic, and care deeply about design. I love working with publishers because each book project gives me an opportunity to immerse myself in a subject matter, distill its structural and visual essence, and translate it into book form. I love contributing to the creation of physical books. I approach projects for cultural institutions and nonprofits in a similar way: What is the essence of the material at hand, be it an event invitation, a poster for a symposium, or a college viewbook? How can I fully convey the content and context of the assignment, while making something beautiful and new?

As someone who focuses on print and publication design, how do you situate yourself in an increasingly digital world?

I’ve found that the demand for publication design—particularly for the kinds of art, architecture, and design books that I focus on—remains strong, even in an increasingly digital world. People want to hold books in their hands to read and study them. They want to own books that they care about—to experience text and especially imagery in physical form. I certainly do!

Increasingly, clients will want to send invitations digitally, or publish magazines or promotional materials in PDF form as well as in print. The design process remains essentially the same for me. I’m confident that good design transcends the medium, as much as I love paper and ink.

Why did you decide to launch your own design practice in 2012? What are the challenges and advantages of running your own practice? (Likewise, what were the benefits and drawbacks of working at a big firm like Pentagram?)

I set out on my own in 2012 because I was ready for a new challenge. I loved being at Pentagram and working with Michael Bierut and his talented team. It was a hard decision to leave. But I wanted the chance to work directly with clients—attracting and maintaining relationships, presenting work to them directly, and focusing on the projects that most interest me. And frankly, I also wanted the flexibility in my schedule to start a family without the pressures of an intensive studio environment.

The benefits of working at Pentagram were many. I learned as much from Michael as I did in graduate school. He thought I was a natural at crafting a logical presentation, but it’s only because I figured out how to emulate his style. Not only does he himself come up with great solutions to design problems, but he inspires his team to do the same. Both in terms of design and presentation, Michael’s studio was a constant master class.

What artists and designers have influenced you the most over the years? Whose work do you find yourself constantly returning to?

Honestly, the biggest influence on my work continues to be Michael Bierut. I still think about how he would handle proposals, projects, and presentations as I work. And, of course, John Gambell remains an important influence—especially in matters typographic!

Do you have any advice for young designers who are just starting out?

Find job opportunities that feel like educational opportunities. There is so much room to continue learning as a designer. Your bosses will be your mentors, so make sure they inspire you!